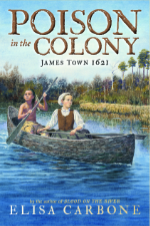 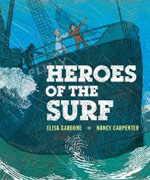 For teachers seeking permission to put text on an internal server for students during virtual learning:
Please contact Penguin Random House Permissions
permissions.penguinrandomhouse.com
Their response time has been very fast, and by using their protocol you should be able to be granted permission to put up portions of a book for student use.


Poison in the Colony: Jamestown 1622 is now out in paperback!

The fascinating companion title to the award-winning historical novel Blood on the River: James Town 1607.

After the colony of James Town is founded in 1607. After Captain John Smith establishes trade with the Native Americans. After Pocahontas befriends the colonists. After early settlers both thrive and die in this new world . . . a girl is born. Virginia.

Virginia Laydon, an infant at the end of Blood on the River, has now grown up in a colony that is teetering dangerously on the precipice of conflict with the native Algonquins. Virginia has the gift, or the curse, of the knowing-an ability that could help save the colony, and is equally likely to land her at the burning stake as an accused witch.

Virginia struggles to make sense of her own inner world against the backdrop of pivotal years in the Jamestown colony. The first representative government is established, the first enslaved Africans arrive, and the self-righteousness of the colony's leaders angers the Algonquin.

When Virginia's mother first learns of her gift, she is terrified. Kill it, her mother says, or they will kill you. When accusations and danger threaten, Virginia learns that she is on her own; her mother must protect her young sisters rather than stand up for her. So begins a journey of self-realization and increasing strength, as Virginia goes from being a self-protective young girl to someone who knows she must live her own truth even if it will be the end of her.

Elisa climbing The Dangler (5.9)
at the Shawangunks in New York.

"One minute she is buried in documents researching deliveries of paint to Manteo and Pea Island, North Carolina in 1895. The next minute she is windsurfing or rock climbing or kayaking the whitewater of the Potomac River. Elisa Carbone pays attention to accuracy and detail whether she is working on her next historical novel or finding the best crevice for her foot on the next rock."

Diana's White House Garden (May 2016, Viking Books for Young Readers)
Picture book based on the true story of Diana Hopkins, the ten year old poster child for the WWII Victory Garden at the White House Illustrated by the very talented Jen Hill

Heroes of the Surf (May 2012, Viking Books for Young Readers)
Picture book based on a true rescue at sea story Illustrated by the very talented Nancy Carpenter

Night Running: How James Escaped With the Help of His Faithful Dog (January 2008, Knopf)
Picture book based on a true Underground Rail Road story
Illustrated by the very talented EARL B. LEWIS

All contents copyright (c) 1998-2019 Elisa Carbone. All right reserved.
Please do not copy anything unless expressly designed for that purpose, like the study guides.
Thank you for respecting the copyright laws.